Crispian Belfrage at the Leone Ranch film 'The Bounty Killer' 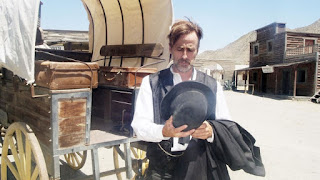 A scene from  the film where Aaron Stielstra, Danny García and Mike Schnapp participate.

Film director Chip Baker stars in The Western “Bounty Killer”, starring Crispian Belfrage, David Gilliam, Ethan McDowell and Aaron Stielstra. The film was filmed in Rancho Leone and its surroundings. The film tells how a Mexican landowner hires the services of a bounty hunter to rescue his daughter, kidnapped on the day of their wedding.

Crispian Belfrage, one of the most famous actors involved in this shoot, it’s the third time he has come to Almería for a shooting. "This shoot is really liking me," he said yesterday, while explaining that "in this film I play the role of cowboy taking opium."

Along with Belfrage are also in this shoot that will last for two weeks in the surroundings of Rancho Leone actor Daniel Jordan who plays a doctor in this film. "I am the doctor of the town in the time of the Old West." Jordan already knew the province of Almeria before, since he has participated in other films.

The case of Mike Schnapp is something curious and striking. He takes part in this film and has come from New York where he makes his living as a disc jockey. He is a large character with a big beard, which makes him fit perfectly into the character he plays in this film directed by Baker.

Schnapp is a very nice guy and is delighted to be in Almeria. "In this film he played the deputy sheriff. One day they discovered me for the movies and I did some tests and I have participated in several films," he said yesterday.

Schnapp is very clear that "I want to continue in the cinema because it is alot of fun, and I love the adventure. I'm having a lot of luck because in the movies I am learning a lot, and I do not get the idea that I am already an actor. To continue in the cinema without leaving my facet of disc jockey, "he said while making clear that" I love Almeria, I have previously shot on this earth."

Aaron Stielstra is another of the well-known actors who participates in the film “The Bounty Killer. "I had heard a lot about all the spaghetti western movies that have been shot on this earth." The actor said yesterday that "the theme of the heat I get along very well because I come from Arizona and there it is also very hot. I am accustomed to it."

Danny Garcia is the producer of the film. "The filming has started very well and we are very happy. We only took two days and we will be in the surroundings of the Rancho Leone for two weeks. The film will be recorded in this land in full, and we hope that in one year we can release it ".

For the next week expected to arrive is actress Lile Victoire and actor David Gilliam who will join the shoot. "There is a scene that will be filmed in a mine very close to Rancho Leone. The story is written to shoott here, precisely in Tabernas, and in this Ranch with so much history, since it was filmed until its time 49 years ago, Explained García.

Tabernas concentrates again a great number of shoots during these dates. The shoot of “The Bounty Killer” also has to add that the film is shot in the Fort Bravo “Les Frères Sisters” (The Sister Brothers” with Joaquin Phoenix as the protagonist. The film in this case is directed by Jacques Audiard.

And after August, Enzo G. Castellari is expected to start filming another film at Tabernas. Although scheduled for filming in June, at the end, it seems to be delayed until the month of September.

Almería is once again a land of cinema, since there are many producers who have set their sights on the places that the province has. At the moment there are many projects for the next months that will gradually get to know each other.