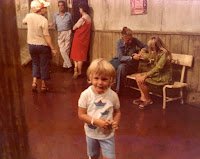 One can have a relative who works in the "Cinema" even a small part .... I myself have all. All. Cousins ​​included. One day I asked my dad, "But who was the first one?" "Grandfather!". Master, Marino Girolami. My grandfather started off in the celluloid world with "Campo dè Fiori" ... with Grand Anna Magnani and Aldo Fabrizi.


During a winter day in 1961, my dad, known by his artistic name, Enzo G. Castellari marries my mom, Mirella Casini ... Mamma is not a mere municipal employee ... but is part of a "clan" of montatrici sisters. I practically have a whole crew as a family. Thinking Well .... That is why, during the nice family meals, it was always only talk and talk about cinema. Never once about football ... Politics? No interest .... Movies Only! True Passion. Deep. Whoever has cookies for breakfast, I have Franco Nero for lunch and Pierino for dinner. Obviously it's a shame to hear the various anecdotes ... .. The best in telling them was my Grandfather. What stories !!! Then we do not talk when the phone rings. Over time I learned to recognize the voices ... like Fabio Testi's mythical: "Son Fabio, is my daddy?" With his beautiful Veronese accent What world are the kids living in.


There are certain memories that are difficult to recall .. if you do not have any photos that can help you open the famous memory drawers. Our brain has a multitude of drawers ... and for some reason - we start to lose "blows" ... How can we help us remember our episodes of past experience? I think photos can help a lot. Positively and also, unfortunately, negatively.


I was born in full "tension strategy": Valle Giulia ... Piazza Fontana ... Pinelli ... The Borgo's Golpe ... The revolt of Reggio Calabria ... Milena Sutter's murder ... The season of terrorism ... Genoa and the BR .... The sequestration Sossi ... Emigration to the north ... The murder of Calabresi ..., The death of Feltrinelli ... Torture and death everywhere ... Political violent extremism. Italy will be sown by events that will shake our way of life. We are only at the beginning.


Today I decided to start this section by analyzing the photos of my family album - my first memories .... There are many black and white, color photographs. There are those of my birth ... my first steps ... my father with a big mustache and long hair (cheerful!). But look at the fashions! The elephant pacifier ... I take a good look at the album, well known are my photos (very small). I'm in a very strange place. I'm on my father's movie set. But certainly !!! ... are the photos of the movie "TEDEUM". Shot in 1972 in Spain and Italy. A comedic Western film, highly demanded during that movie season - like "Trinity" (a film to be directed by my father, but for organizational reasons I could not conclude ...). I take the picture straight in my hand and start remembering - slowly the drawers of my mind begin to open - now I remember the day. What day!!!! The set was in a posing theater - I think the mythical and glorious De Paolis. Sure!!! Yes, the famous theaters are laying on Tiburtina Street. Theaters where the great Toto shot almost all of his films. If you go today ... you arrive immediately in the central square, immediately turn right and continue into a small alley that takes you directly to the bar. Before the bar - look up and see a passage - a "small covered deck". The "bridge" had been built only for Totò - who used it to go directly from his dressing room to the posing theater without going outside .... A drawer in the souvenir tray ...


My mom ... an indoor pool. Never seen an indoor pool. How beautiful!!! I get close and so many people begin to greet me ... But who am I? In the coming years ... I'll know them better. It's the stuntmen my dad will use for all his films. A big family.


During one of the many shootings .... A group of stuntmen take me and bring me to the edge of the pool ... they want to throw me in the pool !!! I'm looking for my mother and my dad. I see them laughing together with my sister !!! But of course ... these "malevivents" agree with them ... I start laughing like never before. But you ... I want to be thrown into the pool! Yes!!! It was really hot. Obviously they do not throw me in. What a shame.