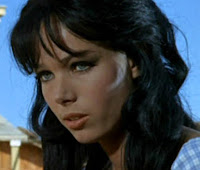 German actress and politician Solvi Stubing died in Rome today at the age of 76. Born in Berlin on January 1, 1941 she became very popular in Italy after a series of TV beer commercials. She also appeared in Playboy and Playman while appearing in over 30 films including three Euro-westerns: “The Sheriff Won’t Shoot” (1965), “Garringo” (1969) and “Blindman” (1971). She then left show business and entered politics. She was named a member of the Commission of European Women.
Posted by Tom B. at 6:50 AM