For the scene where Angel Eyes interrogates Maria the prostitute for information about Bill Carson, Lee Van Cleef was appalled by the fact that he was required to actually hit Maria (played by Rada Rassimov), complaining "I can't hit a woman." Rassimov replied with, "Don't worry. I'm an actress. Even if you slap me for real, it's no problem," but Van Cleef further stated, "I know, but I can't!" As a result, a stunt double was used for shots where Rassimov was slapped, which were intercut with shots of Van Cleef himself. As he later put it: "There are very few principles I have in life . . . one of them is I don't kick dogs, and the other one is I don't slap women in movies". 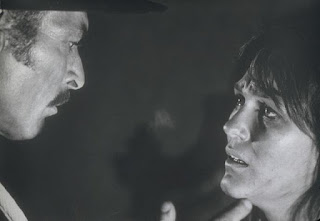