We continue to our search for filming locations for the 1966 film “Navajo Joe”. After Joe kills Sancho Ramirez the scene shifts to Vee Duncan following a trail of money dropped by Joe which leads to the Indian burial ground. There Vee and Joe get into a gun battle until Joe runs out of bullets. Thinking he has Joe cornered he heaps insults upon Joe. Joe is able to get behind Vee through a tunnel and gets the drop on him. When Joe finds a medallion around Duncan’s neck that belonged to his woman he beats Vee with his empty rifle. Seeing a tomahawk nearby he goes to get it and finish the job. Vee is able to get his pistol and shoots Joe who still manages to throw the tomahawk and kill Duncan with the blade of the tomahawk buried in his skull. 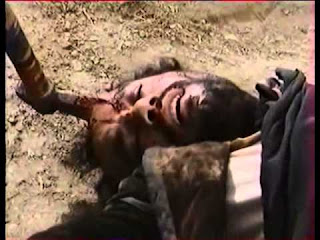 The Indian graveyard is in the foothills surround Gaudix, Spain and is now locked and gated.