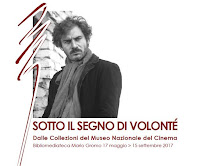 
Biblioteka Mario Gromo - Exhibition space, May 17th - 15th September 2017 (except for August, when the Biblioteca will remain closed from Monday 7th to Friday 25th), Turin, Italy.


It is dedicated to Gian Maria Volonté - a timeless, restless, and rebellious and nonconforming actor - the homage set up in the new exhibition spaces of the Biblioteca Mario Gromo of the National Museum of Cinema, scheduled from Wednesday May 17 to Friday September 15 2017.


The exhibition SOTTO IL SEGNO DI VOLONTE was born from the desire to celebrate one of the most important interpreters of Italian cinema of all time through the precious material that the daughter of the actor, Giovanna Gravina, recently donated to the National Museum of Cinema.


The tribute presents documents that testify in particular to the last decades of Volonté's long career and are enriched with materials from the collections of the Historical Archives, the Biblioteca Mario Gromo and some particularly significant photographic shots of the National Cinema Photographic Library.


The figure of Gian Maria Volonté, both for the roles he played during his career and for the coherence he always pursued in her life choices, belongs to the category of the most free and at the same time deployed artists: he took part in controversial, uncomfortable and censored films, telling in advance about the times not yet known truths, exposing themselves first to criticism and retaliation.


The tribute to the great actor, which can be visited until September 15, is shown with the intention of drawing a portrait of man and artist through the materials his daughter Giovanna Gravina recently donated to the National Museum of Cinema .


The exhibition is free of charge, subject to free registration at the Biblioteca. You will be able to visit Monday to Friday from 9:00 a.m. to 5.30 p.m., except for August, when the Biblioteca will remain closed from Monday the 7 to Friday the 25th.
Posted by Tom B. at 6:04 AM