But despite its iconic status within the Western film world, many deserted sets have been left to rot in Spain

The Fort Bravo/Texas Hollywood set was constructed in the mid 1970s under an agreement with Sergio Leone and an Italian producer.

By the time it was completed, however, the film industry in Almería was on the wane.

Stuntman Rafa Molina later bought the site for $6,000 and began charging visitors to tour it.

The set appears in a number of more recent productions, including Álex de la Iglesias' 800 Bullets and television episodes of Netflix's Penny Dreadful and the BBC's Dr Who. 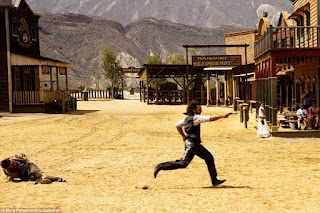 A scene from the daily western show at Mini-HollywoodMini-Hollywood. A woman stands and cowers near the gathered audience as a gun-wielding actor runs along the dusty track leaving another man on the floor clutching his leg. The town now operates as a Western theme park, with daily stunt shows, can-can dancing, and a zoo. 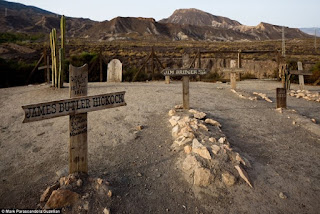 A cemetery at Mini-Hollywood where the old film set has been turned into a working museum and Western theme park. On the tombstones read the names James Butler Hickock and Jim Bridger. Hickok, better known as 'Wild Bill' Hickok, was a folk hero of the American Old West, known for his work across the frontier as a drover, wagon master, soldier, spy, scout, lawman, gunfighter, gambler, showman, and actor. Bridger was among the foremost mountain men, trappers, scouts and guides who explored and trapped the Western United States during the decades of 1820 to 1850. 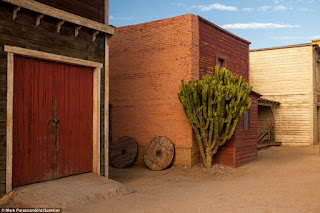 Old west facades in Mini-HollywoodMini-Hollywood. Following the success of A Fistful of Dollars (1964), Sergio Leone commissioned Carlo Simi to construct an entire Western town for the second title in the trilogy, For a Few Dollars More. Two rival bounty hunters, played by Clint Eastwood and Lee Van Cleef, both in pursuit of the fugitive El Indio, eye each other suspiciously from their hotel windows on opposite sides of the street. 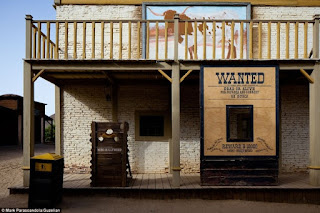 A Wanted sign at Mini-HollywoodMini-Hollywood. The building now labeled The Yellow Rose housed Van Cleef's hotel and the town saloon. The town now operates as a Western theme park, with daily stunt shows, can-can dancing, and a zoo.

Towards the end of the day, a lone actor from the daily Western show crosses the main square of Mini-Hollywood. The old set is still used as a tourist attraction and actors use the facades - including the saloon, railway and mine buildings seen behing the actor - to perform shows during the day. 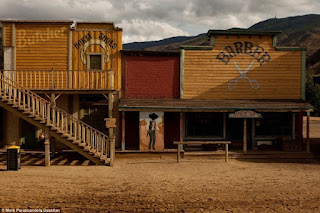 Picture by Mark Parascandola/GuzelianPhotographer Mark Parascandola has been documenting the forgotten era of Hollywood in the Spanish city of Almeria. In the 60s and 70s, Almeria was used to film a number of Spaghetti Western's with some of the sets remaining to this very day. Pictured: Western facades at Mini-Hollywood WORDS BY GUZELIAN. 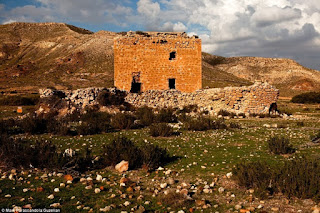 Torre de los Alumbres, Rodalquilar. This 16th century tower appeared as the exterior of bad guy Indio's hideout in Sergio Leone's For a Few Dollars More. In the 1965 sequel to A Fistful of Dollars, Clint Eastwood returns as the man with no name, in one of the most exciting representatives of the genre and the map that cemented Sergio Leone as the king of spaghetti western.