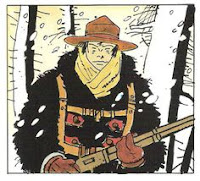 Jesuit Joe is the laconic, anti-heroic and unpredictable main character, a Canadian native dressed in the uniform of a Sergeant in the Canadian Mounties, travels the wilderness during late 19th or early 20th century Canada, occasionally assisting those he finds in need of help. He rescues a kidnapped child and frees an imprisoned couple, but also shoots a bird for being too happy and stabs a priest in the hand.

The concerns of famed Italian cartoonist Hugo Pratt included responsibility, humanity, and social justice. Skepticism of European ideals in colonial settings is a common theme in his stories and forms the main thrust of Jesuit Joe.

The mysterious character appeared in the eponymous story of Italian comics creator Hugo Pratt. This graphic novel was initially serialized in Pilote magazine before it was released as hardcover albums in 1980, in France entitled Jésuite Joe, and in Italy, entitled L'uomo del grande nord, published by Dargaud and CEPIM, respectively. 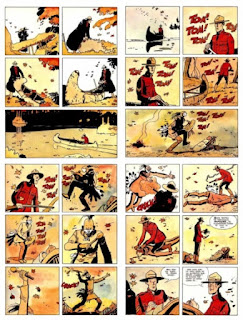 Hugo Eugenio Pratt was born on June 15, 1927 was an Italian comic book creator who was known for combining strong storytelling with extensive historical research on works such as Corto Maltese. He was inducted into the Will Eisner Award Hall of Fame in 2005.

Pratt had a legendary childhood. After spending the first years of his life in Venice with a father who was a fanatical admirer of Mussolini, he was taken to the Italian colony of Abyssinia (now Ethiopia), where his father was a frontier policeman. At the age of 14, Hugo was enrolled in the colonial Italian police force. "I was Mussolini's youngest recruit," he claimed. With the outbreak of war, British troops drove out the Italians, and thus helped to start the youth's cartooning career. The army forbade photography, so he was reduced to making sketches. Some of his first drawings are of the Queen's Own Cameron Highlanders on the Suez Canal in 1937, and show his lifelong obsession with military uniforms and insignia.

He returned to Venice in 1946 and with friends started his first cartoon series in a magazine called The Ace of Spades, sponsored by the publisher Mario Faustinelli, with whom in 1949 he embarked for Argentina, where he stayed for 15 years. It was in Buenos Aires that he created his first books, Junglemen, Ernie Pike and Captain Cormorant, under the influence of the great Argentinian cartoonist Alberto Braccia and of Hector Oesterheld, a scenarist. Four series of Sergeant Kirk followed.

Pratt had always loved reading. His favourites were Jules Verne, Conrad, Kipling, Fenimore Cooper, Jack London and Robert Louis Stevenson, whose Treasure Island he was to illustrate. In Buenos Aires, he encountered artists who were also avid readers, and through them got to know Jorge Luis Borges and Octavio Paz. The great novelist Ernesto Sabato was another favourite whose Informe Sobre Ciegos ("Information on the Blind") was drama- tised in superb cartoon form by Alberto Breccia in a style that was a highly sophisticated development of Hugo Pratt's.

But life was becoming increasingly unpleasant in Argentina, so Pratt returned in 1962 to Venice, where he drew the first pages of La Ballade de la mer salee ("The Ballad of the Salty Sea"). Its hero was Corto Maltese, who brought his creator world fame and great wealth.

Corto is a lifelong wanderer by sea and land; a tall, handsome adventurer in a seaman's cap, with a gold ring in his left earlobe. He is brave, dashing, romantic, mysterious and sexually somewhat ambiguous, though he does have one permanent girlfriend, Banshee O'Dannan, an improbable Irish colleen. Cortese travels the wide world on his fantastic adventures, as Pratt himself did. (Pratt claimed to have six children by six different women, including one he fell in love with in an Amazonian tribe.) This sounds like another mythomaniac addition to the Pratt legend, but in fact Corto Maltese's journeyings and his whole immensely attractive personality are utterly convincing because everything is based on his creator's own experiences.

The backgrounds and the history are copiously researched, from native tattoings to 19th-century warships, and there are delightful landscapes taken from nature, as well as superbly detailed drawings of all kinds of unusual colonial architecture and interiors. Corto lives forever in a dozen or so books set in Ethiopia, Siberia, Venice, Samarkand, Switzerland and the Caribbean. He resembles the perennial seadog hero Maqroll el Gaviero of the magnificent Colombian novelist and poet Alvaro Mutis, who is naturally a Corto Maltese fan, as are a surprising number of writers and intellectuals like Umberto Eco and Jorge Amado. Pratt is also Francois Mitterrand's favourite cartoonist; he once said that he would like to be reincarnated as Pratt's hero.

Hugo Pratt's last book was devoted to another kind of hero, Antoine de Saint- Exupery. But somehow he is not as convincing as Corto Maltese, a character so real that Hugo Pratt wrote his life story - which curiously resembles his own.