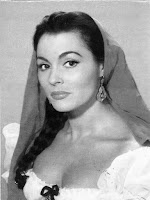 Spanish singer, theater, film, radio and TV actress Paquita Rico died in Seville, Spain on Sunday July 9, 2017. She was 87. Born in Seville on October 13, 1929. As a young woman she enrolled in Adelita Domingo's singing and dancing school and participated in the Spanish ballet with actresses and singers Carmen Sevilla and Ana Esmeralda until a scout, José Brageli, took her to the company of Pepe Pinto, with whom she toured in Spain. She entered films in 1948 and went on to appear in over 35 films and television series. Paquita was also a well known singer who appeared on radio and television. She was married to bullfighter Juan Ordoñez, 'Juan de la Palma' until his death and later businessman Guillermo Arsenio Arocha Fernández, who died in 2002. Rico appeared in only one Euro-western “Savage Guns” (1962) as Franchea.
Posted by Tom B. at 5:26 PM