The Lone Ranger collection consists of 553 stapled notebooks with interior pages in color. Collection of comics edited by three different stamps (all founded by Luis Novaro) over a period of about thirty years, which underwent various changes throughout its 549 ordinary numbers plus 4 extraordinary copies out of numbering: January 1954 / April 1955 / April 1956 / April 1957.
It was published in the years 1953 - 1984

Publishers that published it

EMSA (Ediciones Modernas S.A.) - Numbers 1 to 9.
Seal belonging to the Editorial Organization Novaro with which the collection begins.

SEA (Sociedad Editora América) - Numbers 10 to 128 plus Extras 1 to 4.
This publisher, also belonging to the Editorial Organization Novaro, resumes the collection at the moment in which it leaves to publish EMSA maintaining the numbering and the format that had the copies at that moment.

Editorial Novaro - Numbers 129 to 549.
Seal that arises from the merger of the two previous (in addition to the label Alegría, also belonging to the editorial group) and that resumes the collection at the time that SEA disappears,
Maintaining the numbering and the format that the copies had at that moment.

All the copies of the collection were stapled notebooks.

Initially they had dimensions of 25.5x17.5 cm. Which would later be reduced to 25.5x16.5 cm. In March of 1975, due to the increase in the cost of paper, which forced the publisher to reduce the dimensions of their comics in half (the "Eagle Series" appeared), they were reduced to 19.5x13.5 cm. until the end of the collection.

The number of pages of the notebooks published in the EMSA stage was usually 48 more covered. At the time SEA takes over the collection was reduced to 32 more covers remaining unchanged the pagination until the end of the collection.

The copies distributed in Spain did so with overprinted prices ranging from 7 to 20 ptas. Depending on the stage in which the collection was.

The collection published material from the US publishing company Dell Publishing, specifically notebooks appeared within the collections The Lone Ranger, Tonto and HI-YO Silver. In addition, many cartoons of The Lone Ranger were made by autochthonous authors, as well as the series The Young Hawk.

The periodicity was initially monthly. At the end of 1969 or the beginning of 1970, and moved to biweekly. 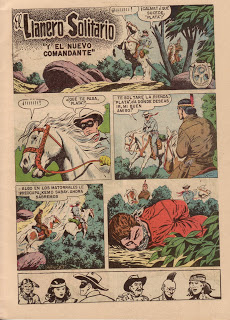