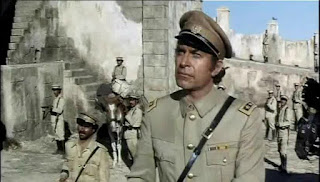 Martin Landau, the all-purpose actor who showcased his versatility as a master of disguise on the Mission: Impossible TV series and as a broken-down Bela Lugosi in his Oscar-winning performance in Ed Wood, has died. He died at UCLA Medical Center in Westwood, California on Saturday afternoon July 15th. He was 89.  Landau was born in Brooklyn on June 20, 1928. At age 17, he landed a job as a cartoonist for the New York Daily News, but he turned down a promotion and quit five years later to pursue acting. Landau worked as director, teacher and executive director at the Actors Studio West. He has been credited with helping to guide the talents of Huston, Warren Oates and Harry Dean Stanton in addition to Nicholson. Landau appeared in a number of TV westerns and western films but only one Euro-Western as ‘The Colonel’ in 1971’s “A Town Called Hell.”
Posted by Tom B. at 6:39 PM