Soul on a String

There are unique pleasures to be found in genre films. Westerns, film noir, science fiction — any film that embraces a set of familiar, easily defined parameters may fit the bill. The genres are naturally limiting (just about any Western has to accommodate horses, outlaws and the open frontier), but limitations are key to genre films’ appeal. The finest examples mix the tried-and-true with the unexpected to create something comfortable but new.

There’s another range of possibilities created by films that blend familiar genres in unfamiliar ways. Mix two parts spaghetti Western and one part samurai film, add splashes of magical realism and Eastern mysticism and you’ve got the basic recipe for Chinese filmmaker Zhang Yang’s Soul on a String.

Adapted from two novels by Tibetan author Tashi Dawa (who also co-wrote the screenplay with Zhang), Soul on a String demonstrates the potential gains from pushing genre films into uncharted territory. It’s far from perfect — the film loses focus in its final act, blunting the effect of its big finale — but those with a strong appreciation for its varied sources may find the film difficult to resist.

Soul on a String tells the story of Taibei, a Tibetan wanderer from a distant time who discovers a sacred stone in the mouth of a deer and begins a quest to return the stone to its rightful home on the holy mountain of the Buddha’s handprint. Taibei is pursued by two brothers looking to avenge their father’s death, a pair of low-level thugs trying to secure the gem for their crime boss, a woman named Joan who wants Taibei for her husband, and a writer who’s following Taibei’s evolving story but may actually be from the future. 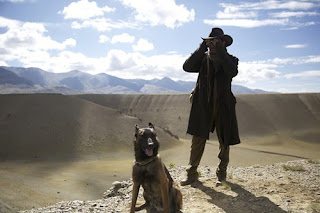 Zhang’s strongest influence in making his Tibetan Western is surely the work of Sergio Leone, especially his spaghetti-Western masterpiece, Once Upon a Time in the West. Like that film, Soul on a String combines a leisurely, Zen-like vibe with truly epic scale. Lengthy, often meditative sequences are interrupted by sudden though infrequent bursts of violence. Co-author’s Tashi’s long-held connection to Latin-style magical realism — as seen in the work of writers such as Gabriel Garcia Marquez — adds another dimension to the film, and sets it apart from even the most artistically adventurous Westerns.

The work of cinematographer Guo Daming also ensures that Soul on a String has an identity all its own. The vast Tibetan Plateau provides a seemingly endless supply of breathtaking vistas. In another film, these lavish images of the natural world might seem a mere distraction, but they become essential in the context of a story driven by Buddhist principles that often address man’s place in nature.
Soul on a String’s unique Chinese-Tibetan pedigree has caused some controversy in light of China’s occupation of Tibet, and some critics have taken the filmmakers to task for avoiding political issues altogether. Zhang spent several months living in Tibet before starting work on his Tibetan-language epic, and the resulting work can be taken as part of a new wave of films — made by Tibetan filmmakers or collaborators — that seek to bring something authentic of Tibet to the big screen. That sounds like progress, especially for a humble genre film.