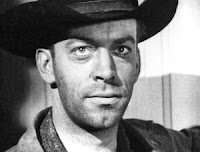 George Vincent ‘Skip’ Homeier died in Indian Wells, California on  June 25th 2017. He was 86. Born in Chicago, Illinois on Ocotber 5, 1930. Homeier started out as a child actor and his career spanned 6 decades. He was in many westerns in the 1950 and 60s usually playing the smart mouth young gun always looking for trouble and usually getting it. Skip was one of the most reliable character actors of his day and appeared with such greats as Randolph Scott, Gregory Peck, Rory Calhoun, Chuck Connors and Clint Eastwood. Skip made one of his last appearances in a U.S. / German co-produced pilot for a TV series called ‘Quell & Co. in 1982. The series was not picked up but the pilot was later released on DVD as ‘Showdown at Eagle Gap’.
Posted by Tom B. at 11:29 AM