Spaghetti Western Trivia ~ The Man With No Name? 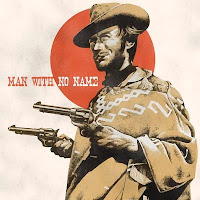 One of the selling points to the “Dollar Trilogy by director Sergio Leone was the creation of the “Man With No Name”. This mysterious gunman who travelled the West never gave his name but he has a name in all three of the films. In the first film ‘Fistful of Dollars” the undertaker Piripero calls him Joe. In the second film “For a Few Dollars More” the sheriff of Tucumcari tells  Colonel Mortimer that his name in Manco and in the third film “The Good the Bad and the Ugly” Tuco calls him Blonde.
Posted by Tom B. at 3:35 PM