Who Are Those Composers ~ Odón Alonso 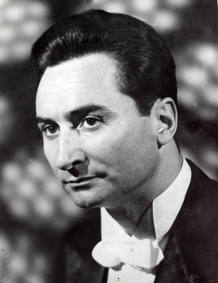 Odón Alonso Ordas was born in La Bañeza, Province León, Spain on February 28, 1925. He was the son of the orchestra conductor Odón Alonso González, who was one of the most important Spanish orchestra directors of the second half of the twentieth century.

After graduating from the Madrid Conservatory and the Faculty of Philosophy and Letters, he moved to Siena, Salzburg and Vienna. In 1950 he was appointed musical director of the Chamber Choir of National Radio of Spain, and, seven years later, the Theater of the Zarzuela. In 1960 he was responsible for the Madrid Philharmonic Orchestra before joining the Spanish Radio Symphony Orchestra. When he left, he took over the Puerto Rico Symphony Orchestra and the Casals Festival. He also directed Spanish orchestras and others from Austria, Italy, France, Portugal and various American countries. He was the holder of the chair of opera and oratorio of the Superior School of Song of Madrid. He was presented with the honorary medal of the SGAE and the title of "Official" of the Order of French Arts and Letters .

He was an adopted son of Puerto Rico and received the Order of Cisneros, the order number of the Order of Isabel the Catholic, the gold medal of Unicef ​​and the medal to the artistic and cultural merit of the Complutense University of Madrid. In 1977 he was named Best Spanish Director of the Year by Record World magazine.

Until his death, he directed the Musical Soriano Autumn, a festival held every September in the capital of Soria in the surroundings of the Palacio de la Audiencia Cultural Center, whose main auditorium is called Auditorio Odón Alonso.

Alonso also composed the original scores for films like “Residencia para Espias "(1966) and “El Diablo que vino de Akasawa” (1971), both directed by Jesus Franco. Alonso composed scores for two Euro-westerns “The Coyote” (1955) and “The Justice of the Coyote” (1956).

On the 9th of February of 1995 Odón was named Adoptive Son of the City of Soria. During the closing of Soriano Musical Fall, in its 2008 edition, the sixteenth, the Mayor of Soria, Carlos Martínez, announced that one of the main squares of the city would receive the name of the maestro.

Odón Alonso Ordas died in the early hours of February 21, 2011 in a clinic in Madrid, at the age of 85 years. On February 22, 2011, the City of Soria agreed to grant the City's Gold Medal and dedicate it to his memory at the festival of which was his alma mater.