If you remember the opening credits by the end of the film, you’re likely to be confused because they show someone nailing up a wanted poster for someone named Ringo. Only there’s no Ringo in the film. And German Cobos’ character isn’t wanted; he’s already been demoted for his supposed misdeed during the Civil War.

That said, foreign posters for this film will make you wonder if an entire subplot wasn’t eliminated when the film was cut to 87 minutes. They depict town scenes and Mexican bandits you won’t find in the 87-minute version of the film. Or was that just deceptive marketing to capitalize on the Ringo craze? There’s also a top-billed Johnny Harrison in the Italian print. Huh? 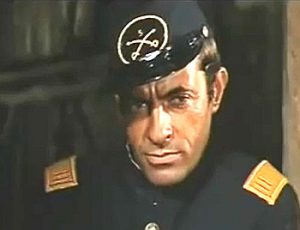