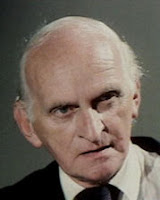 John Karlsen, sometimes credited as Charles John Karlsen or John Karlson died in Auckland, New Zealand on July 5, 2017. He was 97. Born on October 20, 1919 in Wellington, New Zealand, he was very active in the Italian cinema between 1958 and 2003 in roles as a character actor. He appeared with directors such directors as Louis Malle, Joseph Losey, Roman Polanski, Federico Fellini, Alessandro Blasetti, Dino Risi and Roberto Benigni. John has appeared in over 80 films and television appearances. He may be best remembered for his role of the Evil Duke in “Bill & Ted's Excellent Adventure” in 1989. Karlsen played the University Dean in Sergio Sollima’s 1967 film “Face to Face” starring Tomás Milian, Gian Maria Volonte and William Berger.
Posted by Tom B. at 6:37 AM