We continue to our search for filming locations for the 1970 film “Adios, Sabata”. The scene shifts from the Colonel Skimmel’s massacre to a ranch site where a duel is about to begin between Sabata and the three Murdock brothers. Men have gathered to watch and are placing bets on the outcome. 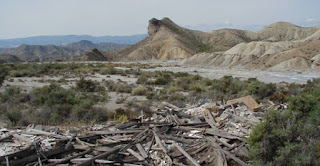 This scene takes place in the familiar Spanish location of Las Salinillas, Spain where many Spaghetti westerns were shot including “The Ugly Ones”, “Death Rides a Horse”, “The White, the Yellow, the Black” and “The Deserter”.