The short film is a fantastic western, written and directed by the filmmaker Fran Mateu

The School of Cinema of the University Miguel Hernández (UMH) of Elche finished its third edition with the recording of the short film "Hell West". This shooting, carried out during this week at the facilities of the Funwest of El Campello, has had the participation of more than 40 people between actors and technical team. The UMH Film School is a training program whose objective is to complement the academic training of the students of the degrees in Audiovisual Communication and Fine Arts of the UMH.

According to the organizers, the short is a fantastic western, written and directed by the filmmaker Fran Mateu. It tells the story of a sheriff who is the victim of an Indian curse because of his brother. In the cast are actresses like Rebeca Sala, who will participate in the last film of Fernando Colomo; Silvia Conesa, Morgan Blasco or Fele Pastor.

The UMH Film School aims to enhance the practical learning of students and enable them to live real cinematic experiences where they work hand in hand with professionals from the sector and with teachers in the creation of audiovisual productions in the field of fiction.

The School of Cinema is directed by UMH professors Guillermo López Aliaga and Mario-Paul Martínez Fabre and has the collaboration of the Vice-Rector of Culture and University Extension of the UMH, the Faculty of Social and Legal Sciences of Elche, the Department of Art, the Degrees in Audiovisual Communication and Fine Arts, the Social Council, the Service of Innovation and Technical Support to Teaching and Research (SIATDI) and the Communication Service of the UMH.

Last year, the School of Cinema of the University Miguel Hernández (UMH) of Elche finalized his second edition with the recording of the short film "Mírame". This shoot, which involved about 40 people between actors and technical team, was held in Alicante. The short belongs to the genre of the drama, with touches of psychological terror, and tells the story of Rocío Hernández, a mother willing to do everything to cure her daughter's illness.

For his part, Fran Mateu recently participated in the Film Festival of Elche with the short film "Hidden Devil", which has occupied several years of his life. "We had to build sets, use special effects of makeup, prosthetics ... We shot it in Sax, but teams from Madrid and Barcelona intervened. Before all this, we had to do a crowdfunding campaign to get the necessary funding, "explains the author, who in turn is director of the Fanta Elx Festival. 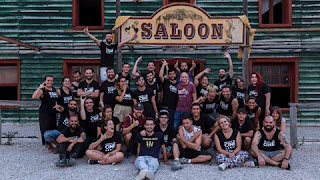