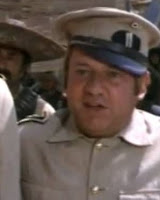 Italian comedic actor and author Paolo Villagio died July 3rd in Rome. He was 84. Born in Genoa, Italy on December 30, 1932 and throughout his long career interpreted various roles such as Professor Kranz and Gioandomenico Fracchia. But he will be always remembered for the role of Ragioniere Ugo Fantozzi, a character who was always at the wrong end of the stick and faced numerous humiliations. Villaggio is also the author of eight books related to the Fantozzi character. He appeared in three Euro-westerns: “The Four of the Pater Noster” (1969), “What Am I Doing in the Middle of the Revolution” (1972) and “Don’t Touch the White Woman!” (1973).
Posted by Tom B. at 8:09 AM