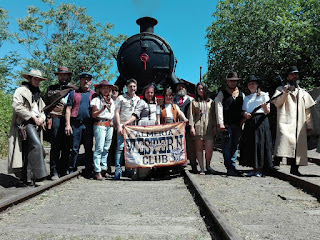 Numerous people, coming from Guadix but also from other localities and provinces, had occasion to go on Saturday July 1st to the Far West thanks to one of the proposals organized by the City Council of Guadix and the Association of Neighbors of the Station on the occasion of the festivities of the Slum.

From 10:00 am to 2:00 pm, the La Guadix-Baldwin steam locomotive was once again started up in a special occassion that was enlivened by the Almería Western Club (AWC), a non-profit association based on the Tradition of the old American West that recreates costumes and typical Western shows.

It was an unforgettable morning that left the attendees wanting another future date set.
Something that, as announced by the Councilor of Tourism of the City of Guadix, Iván López Ariza, will be possible later this summer, around the month of September or October.
To enjoy this activity and to access the railroad year for a small fee was properly signposted away from the station and was done on the back of the stagecoach, never at the station itself. As always, there was the collaboration of volunteers of Civil Protection and agents of the Local Police.
Posted by Tom B. at 6:21 AM