Who Are Those Gals? ~ Hélène Chanel 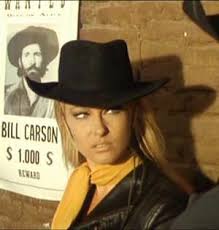 Hélène Chanel was born Hélène Stoliaroff on June 12, 1941 in Deauville, Calvados, France. She is the sister of actress Nicole Stoliaroff   She is a former French actress of Russian heritage and was active in the 1960s in a variety of European international co-productions of sword and sandal, Eurospy and Spaghetti westerns. She was credited with a variety of names such as Hélène Chancel, Helen Chanel, Sheryll Morgan, Helen Stoliaroff and Hélène Stoliaroff.

A former model, she had a brief career as an actress in Fotonovelos by the publisher Lancio. Helene entered films in 1959 in the film “Les dragueurs” opposite Ugo Tognazzi. Her surname was to have been changed to "Chancel" (which means Lucky in French), but an Italian publicity agent misspelled it to "Chanel". She went on to appear in over 50 films from 1959 to 1977. Among which were six Euro-westerns. After her final appearance as the landlady in the 1977 film “Wifemistress” where she was billed as Helen Stoliaroff.

After retiring she and her husband ran a tourist business in Italy and has considered from time to time re-entering the film business on the production side of the camera.