Who Are Those Gals? ~ Geraldine Chaplin 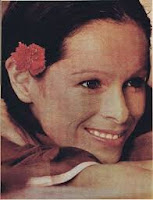 Geraldine Leigh Chaplin was born in Santa Monica, California on July 31, 1944. She was the fourth child of the movie star Charlie Chaplin. She was the first of his eight children with his fourth and last wife, Oona O'Neill. Her grandfather was the Nobel Prize and Pulitzer Prize winning American playwright Eugene O'Neill. When Geraldine was eight years old, the family moved to Switzerland, where she went to school. This is where she learned to speak both French and Spanish.

When Chaplin was eight years old, she acted in her father's movie “Limelight”. She studied at the Royal Ballet School, in hopes of becoming a ballet dancer. When that did not work out, she became an actress instead.

In 1978 the Chaplin family were the victims of a plot by kidnappers who had stolen the body of Charlie Chaplin for ransom. Geraldine negotiated with the kidnappers, who threatened to shoot her baby son in the knees

David Lean chose her to play Tonya, the wife of the leading role, in his movie Doctor Zhivago. In an interview about the movie, she said "Because of my name, the right doors opened." She received a Golden Globe Award for her performance.

In 1967, she acted in a famous play in the Broadway theatre, Lillian Hellman's “The Little Foxes”. Her performance was praised in a review in The New York Times. Cliff Barnes wrote that Chaplin "acts with spirit and force," all the while "acting with a magnificently raw-voiced sincerity" in what was a performance of "surprising power." She received a BAFTA nomination for her role in “Welcome to L.A.” in 1976. She played her grandmother, Hannah Chaplin in the movie, “Chaplin” in 1992 and received her third Golden Globe nomination. She has also acted in “The Age of Innocence” in 1993, “Home for the Holidays” in 1995, and “Jane Eyre” in 1996.

Chaplin has also acted in several Spanish and French films. She received a Goya Award for Best Supporting Actress for her role in a Spanish-Argentine movie, “In the City Without Limits” in 2001.

After living in Spain for over 25 years, Chaplin left in 1992 because of personal difficulties. She moved back to her family home in Vevey, Switzerland. She married Patricio Castilla in 2006. She has two children and a godson: She has a home beside the beach in Miami and also spends time living in Madrid and Switzerland.

In 2018, she starred as Iris in Jurassic World: Fallen Kingdom.