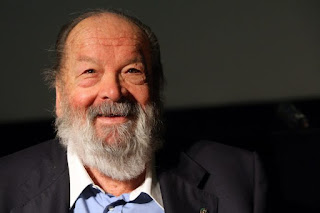 Bud Spencer: the Pedersoli family has announced a film about the life of the beloved actor.

The son of the actor Giuseppe Pedersoli announced it at the Terni Pop Film Fest.
Best Movie
By David Stanzione
9/28/2018

The life of Bud Spencer will soon become a film, at the moment we are working on the screenplay that will retrace the life of Bud before his debut in the entertainment world. This was the announcement made yesterday by Giuseppe Pedersoli, son of Carlo Pedersoli, during the opening ceremony of the Terni Pop Film Fest - Popular Cinema Festival that wanted to inaugurate the event recalling one of the most symbolic faces of popular cinema .

Guests of the evening the sons of the great Carlo Pedersoli, Giuseppe and Diamante and his nephew Alessandro Pedersoli, who told not only some curious episodes of the career of the great Neapolitan actor, but also and above all the human side of "Papa and Grandfather Bud".

"We could not start with him" - explained the artistic directors Simone Isola and Antonio Valerio Spera - "since his films have marked four generations".

The filmography of the artist, in fact, has been able to cross national borders, making the figure of Bud Spencer a real icon carved in time: "For us it is almost as if he has never gone" - explained Giuseppe Pedersoli - "We found, even opening a Facebook page in his memory, how people from all over the world feel as one of the family. He always said he was not an actor, after many years I understood the meaning of that phrase. He did not play any characters on the set, he was exactly as he was in life. "

"Our father came out of the screen" - continued Diamante Pedersoli - "with his sympathy, his passion, he always had a smile for everyone".

In the second part of the ceremony, the "Bud Spencer - Next Generation" Award was given to the young actor Marco D'Amore.
Posted by Tom B. at 6:29 AM