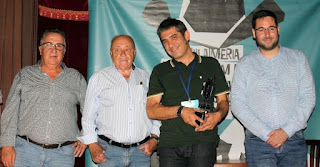 [The director of production Toni Novella, together with the mayor of the town, at the acceptance of the award. / AWFF]

The special prize of the jury for the best neo-western was given to 'Ultravokal', by Christophe Karabache (France). On the other hand, the recipient of the prize for the best interpretation was Abby Eiland, for 'Cassidy Red' (United States); and for the best technical-artistic contribution to the western genre Guillermo de Oliveira, for the feature documentary 'Sad Hill Unearthed' (Spain). The public prize has been awarded to 'Dead Men', by Royston Innes (United States).

In the official short film section, the prize for the best western short has been for 'Draw Your Gun', by Wouter Jansen (England); and the best short neo-western has been 'Tomorrow', by Andrew Tarbet (Spain).

The RC Service award for the best cinematography in a Spanish work went to Alejandro Espadero for 'Bailaora'; the Canal Sur award for the best Andalusian western genre creation was for 'Revenge is Served Cold', by Julio García and Miguel Ángel Cañadas (Almería); and the award for the best practice of film schools has fallen on the work 'Hell West', by Fran Mateu (School UMH, Alicante).

The festival gathered this year a total of 30 short films from four continents, since the official international section of shorts, which is structured in the 'western' and 'neowestern' category, has been made up of 20 works of fiction, animation and documentary, to which it is necessary to add that four shorts competed in the Andalusian creation section and, the other six, of cinema schools of centers in Madrid, Barcelona, ​​Alicante, Malaga, Granada and Almeria.

Since the organization of the festival they have highlighted in a statement that the positioning of Almeria Western Film Festival internationally "has been clear with the increase in registrations that have been made in this edition."

Specifically, in the official international short films section, 20 works of fiction, animation and documentary from Spain, France, Italy, the United States, England, Australia, Germany, Mexico and Argentina were entered. Also, for the first time there have been works from Iran, Nepal, South Korea and Costa Rica.

In the Municipal Theater of Tabernas a total of three presentations have been projected with the presence of directors and other members of the team of these productions. Yesterday, Saturday, four short films for the Andalusian creation section and six short plays for the section of film schools from Madrid, Barcelona, ​​Alicante, Málaga, Granada and Almería.

The director of 'UltravoKal', Christophe Karabache, was awarded yesterday, meanwhile, his feature film, the last screening of the official section, a new premiere at European level that has reached Almeria Western Film Festival. "The film is a genre of neowestern, an idea that comes after developing the script, which only took up ten pages," he explained.

“I realized that there were several characteristics to classify it as such, since it was developed during the project. For six months we were improvising after filming about ten days in Belgium. A very new film, since this is our second festival and we are delighted to present it here,” said French director Karabache.

The fifth day of the Almería Western Film Festival also included in the Fort Bravo Texas Hollywood the award of the 'Desierto de Tabernas' award to the production director Toni Novella.

A master class in photography was also held, another session on the distribution of short films and a round table discussion on 'Andalucía, as a film destination', with the presence of the Andalusian Film Commission's director, Piluca Querol.