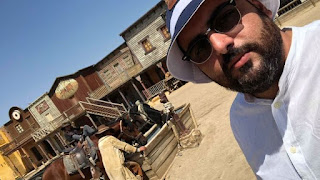 The historic scenery of the Tabernas desert will host, from February, the filming of the first western produced in North Africa. This was announced by the Algerian producer and director, Nassim Boumaiza, who has chosen this mythical site to create the traditional and always highly anticipated series of the holy month of Muslim fasting or Ramadan.

"This is the first time that Fort Bravo will host a North African film," says Boumaiza, whose references include titles such as Les Frères Sisters by French director Jacques Audiard, and he declares himself an admirer of the cinema of Sergio Leone, soul of the "spaghetti western".

The Algerian producer, responsible for several successful series of comedy during the month of Ramadan, explained that Tabernas will take a team of 45 people between actors and technicians to film a similar type of comedy that will be broadcast in May on state television.

His first option was, however, to build his own sets in the desert of Algeria, however, the weight of history and, above all, "the price" convinced him that Almeria was his destination.

"In principle, I opted for our desert but the company that should carry out the woodwork was excessively expensive, only then I thought of looking for real sets that already existed," he said.

"They are open people, they welcomed us very well and allowed us to visit all the studios, I just thought it was amazing to be able to shoot here, where Sergio Leone or Steven Spielberg did it," he said.

For the director of the Algerian version of Camera Café - Antar weld cheddad (2017) - the prices of the Fort Bravo studios are "extremely reasonable" given that they include extras, specialists, accommodation, food.

"Spain will provide us with very wise people in terms of western style and the team will be mixed, for me that means a good compromise between the two countries, the Spaniards will be very useful in terms of specialists and let's learn from them, "he said without revealing the argument.

The series, still without title, will feature the participation of, among others, the famous comedian Beyouna and the younger face of the new Algerian comedy Merouane Guerouabi. Undoubtedly, this is great news for the province of Almeria, since it is the first production that has confirmed its filming for the year 2019. Almería is still Tierra de cine and a favorite place to shoot.
Posted by Tom B. at 6:06 AM