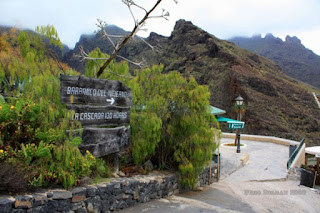 Barranco del Infierno (“Hell’s Gorge”) is a picturesque ravine located in the town of Adeje in the south of the island of Tenerife, Canary Islands, Spain. A popular hiking trail leads through the ravine to the highest waterfall on Tenerife. Access to the gorge is controlled by a limitation on the number of daily visitors.

The area is very important archaeologically, since there are hundreds of caves that were home to many aboriginal Guanches, as well as caves with engravings. The largest collection of Guanche mummies and utensils were found here and placed in the Museum of Nature and Man of Santa Cruz de Tenerife.

The trail was closed for security reasons after a deadly accident in 2009, until 2015. Currently it is open all the way to the end, additional safety measures have been implemented.