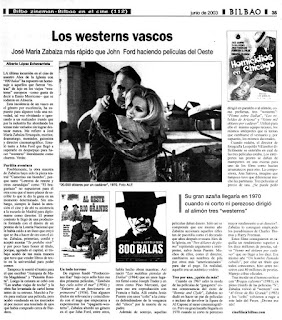 The latest incursion into the cinema by Álex de la Iglesia with "800 Balas" (800 Bullets) was a tribute to those who were the "extras" of luxury in the old European "westerns" - as Ennio Morricone likes to say - that were filmed in Almeria.

This incident of a Basque in the genre par excellence, has been for some a novelty, perhaps forgetting or ignoring a filmmaker who by the film industry addressed the most varied issues without ever ruling them out. I speak of Jose Maria Zabalza Errazquin, writer, playwright, editor, script writer and film director. Who emulates much like John Ford that he almost surpasses him in desperation to later "Westerns" literally like churros.

Possibly, Zabalza's masterpiece was the play "Camerino sin biombo" (1967) because both "Letreros de retrete y otras zarandajas" and "El braguetazo" did not mean much to him that he felt like a playwright. However, he always called attention to the cinema and hence his assistance to schooling in Madrid to graduate as a director. The first contract he was given was for a production financed with money given as a prize from the National Lottery that had fallen in his lap and one that he was going to be make into gold with the cinema. Zabalza, first, I confine and accept to ride "Está prohibido vivir" and almost honors the title, because, it exhausted his capital, it was so bad that he had to sell his textbooks at the university to eat.

Nor did he smile at the theater for which he wrote "Autopsia de Maria Magdalena" and "Pensión Rosita". The censorship was fought over with "Las arandas travels at night" and the work was granted hours before its release. He went to Paris to make a movie, but ended up selling in the retail markets a ton of garlic that he had bought near Bardeos.

An all terrain
On coming home he founded "Haz Films Cinematographic Productions. " under whose seal he made his first two films, "También hay cielo sobre el mar" (1954), and "Entierro de un funcionario en primavera" (1956) After some other titles with little relevance and coinciding with the new boom he began to experiment with  the "Spaghetti-westerns". Zabalza tackled a genre in which John Ford, among others had made masterpieces. So was born "The Damn Pistols of Dallas” (1964) where in some places he was credited as Joseph Trader and in others as Pino Mercanti, these were co-productions with France and Italy." There was Jesus Puente with some "Colts" at his waist defending himself against the revenge of a "boy" for the death of his father.

Besides being a learning tool, those films made him some denero. Only so it compelled Zabalza that same year he sold his film rifles cheap an the set that years later Alex de la Iglesia, made "Tres dolares de piombo" repeating the same plot and performers, except Jseus Puente. Many of them, like the director changed their first names to be more "Americanized" to make it a hit.

Three for one. Who wants more?

Then his great feat would come in 1970 when neither short nor lazy he wrote and directed, which he prefered, three westerns "Bullets Over Dallas", "The Rebels of Arizona" and "Twenty Thousand Dollars for a Corpse". He used the same film equipment for this, the same actors so they did not have to change their costumes and, by the way, the same sets.

When filming, the director of photography Leopoldo Villasenor easily found out which of the three films he was in. The performers as soon as they would get stuck in a scene for one of the films it was used for another. The soundtrack composer, Ana Satrova, imagined that the particularas did not have to defer very much either. Three movies for the price of one. You can pay for three movies by giving money for one.

Three for one, who else?

When in 1967 came the fashion of "gangster" movies as a result of the success of "Bonnie and Clyde". Zabalza did not hesitate to make a couple of films and included to return the figure of Al Capone to the cinematographic senerio. Zabalza consigned them by applying the pseudonym of Charles Thomas and Harry Freeman.

These short films went to the box office and made more than ten million pesetas, except "$20,000 for a corpse" that did not reach ten. That same year, "A Man Named Horse", to quote a title that we all know, made around $80 million pesetas.