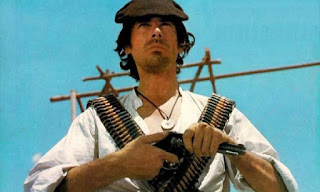 Tomás Milián’s father Tomás Sr.was an army captain under the Cuban dictatorship of Gerardo Machado y Morales. In 1933 the Morales the dictatorship was overthrown and his father was arrested and jailed and then sent to an asylum. The relationship between Tomás senior and Tomás junior appears to have been very difficult, both for the military rigidity and the mental fragility of the parent and for the sensitivity and the grumpiness of the child. On the New Year’s Eve December 31, 1945, the officer decides to take his life with a gunshot right under the eyes of his son.
Posted by Tom B. at 4:06 PM