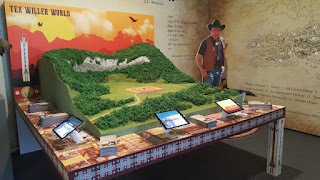 A new western theme park “Tex Willer World” is being designed by Giorgio Bonelli, brother of Sergio and son of Gianluigi the creator of Tex Willer. Waiting on authorizations for the investment it will be a 20 million euro project. The search for investors has just begun so no completion date has yet to be discussed.

Tex Willer World will hopefully be built in Montegrotto Terme in the province of Padua, Italy  in the middle of the Euganean Hills Regional Park. There, Giorgio Bonelli bought an area of ​​a disused 23 acre quarry for a figure of around 2 million euros.

The intentions of Giorgio Bonelli, is that the park will have a setting of typical western history, with a village, an Indian camp and an old Mexican mission. Obviously you will go down into the valley, entering the world of Tex through the house of El Morisco, or that of Kit Carson or the theater of Mefisto.

“It will be a reconstruction of the old western towns” explained Giorgio Bonelli, “with structures made of wood, perfectly in tune with the context of the park”.

In addition to the attractions, there will also be space for games and entertainment, with a field dedicated to paintball, hiking, canoeing and horseback riding, but also showings of spectacles against the backdrop of the rock face overlooking the park. 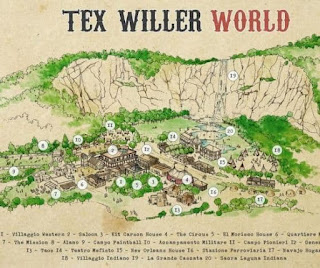