Wednesday, October 11, 2018. - On the middle day of the Festival, at Oasys MiniHollywood, Almería Western Film Festival (AWFF) presented the 'Tabernas de Cine' Prize to Italian actress Claudia Cardinale, star of the film of honor “Once Upon a Time in the West” that celebrates its 50th anniversary this year. For the Italian actress “Tabernas is very important because fifty years ago she was here filming with Sergio Leone, it's fantastic, that's why it's very important for me to be here today. Thank you all, this prize is going to be dedicated to him. And yes, I would go back to Tabernas to shoot a new movie if they offered it to me,” she said. 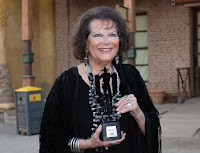 Claudia Cardinale played the first important character of a woman in a Euro-western movie. "I was the only 'donna' (woman) among so many men. It was great, being in a beautiful environment like Tabernas. Recently I was at the homage in Paris to Sergio Leone and it was very exciting. I feel fortunate to have worked with great directors like him. I did not expect this award, it's something incredible, for me it's fantastic,” she said.

The 'Tabernas de Cine' Prize was also awarded this year to the Italian actor Giuseppe Salvatore Borgese, better known as Sal Borgese, has participated in countless European film and television productions. His name is linked to spaghetti western and spy movies. After gaining popularity with Terence Hill and Bud Spencer, he starred in several films directed by Sergio Corbucci, Antonio Margueriti or Francis Ford Coppola. Some films shot in Almería in which he participated are Voy, I kill him and I come back (Enzo G. Castellari, 1967), Goodbye, Sábata (Gianfranco Parolini, 1969), The Corsairs (Ferdinando Baldi, 1971) and In the West you can make ... friend (Maurizio Lucidi, 1972).

The objective of this award is to recognize the career of an active professional in the film industry who has worked in the Tabernas desert and has also contributed to the spread of this location. Novella has probably been the production director who has participated in the most ambitious international productions filmed in Tabernas over the last decade, and who has offered employment to many people in Almeria in various departments. 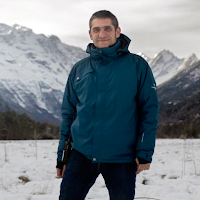 Toni Novella began his career in advertising and as a trainee in the feature film “Bazar Viena” (Amalio Cuevas, 1990). Immediately he started working as a production assistant in El Deseo, the film production company of the brothers Agustín and Pedro Almodóvar, in the films directed by the latter (High Heels, Kika, Live Flesh or All About My Mother). He took part in the feature films Mutant Action (Álex de la Iglesia, 1992) and Everyone Off to Jail (Luis García Berlanga, 1993), and in the TV fiction series Villarriba y Villabajo and La banda de Pérez. At the turn of the century he made the leap into the production management with the film Intact (Juan Carlos Fresnadillo, 2001) and The Devil’s Backbone (Guillermo del Toro, 2001). Since then, he has been responsible for the production of important Spanish feature films such as Talk to Her (Pedro Almodóvar, 2002), Obaba (Montxo Armendáriz, 2005), Come Back (Pedro Almodóvar, 2006), Che, Part One and Che, Part Two (Steven Soderbergh, 2008), The Kid (Daniel Monzón, 2014), for which he won the Goya Award for Best Production, and Pal Trees in the Snow (Fernando González Molina, 2015). Furthermore, he has been responsible for the production of the second Spanish filming unit of the international film The Bourne Ultimatum (Paul Greengrass, 2007), head of production in Asterix at the Olympic Games (Frederic Forestier, 2008) and the head of the main production unit of Exodus: Gods and Kings (Ridley Scott, 2014). The last two films being shot mainly in the desert of Tabernas. 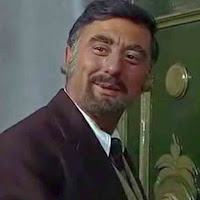 This award is a symbol of brotherhood amongst the three Western villages of Tabernas: Oasys MiniHollywood, Fort Bravo Texas Hollywood and Western Leone, which owe a large part of their original design to this great professional. It is an award that arrives in the year that these three film studios come together for the first time in the Festival’s framework”

Despite studying architecture as a young man, he began his career as a production designer, art director and costume designer in the cinema world during the sixties. He stood out mainly for his collaboration with the Italian directors Sergio Leone and Sergio Corbucci. He was responsible for the scenery in The Dollars Trilogy by Leone, designing a large part of the sets built in Tabernas for the films A Fistful of Dollars (1964) and For a Few Dollars More (1965). In the latter, he acted for the first and last time in his life as the bank manager of El Paso. He also designed the figurines for the iconographic characters of Clint Eastwood, Eli Wallach and Lee Van Cleef in the film The Good, The Bad and The Ugly (1966), as well as the set and the cemetery Sad Hill, built in Burgos by the Spanish Army. However, his best creations are perhaps the sets and wardrobe for the film One Upon Time in the West (Sergio Leone, 1968). In 2005, the Autry Museum of the American West in Los Angeles held an exposition displaying a large portion of his creations. 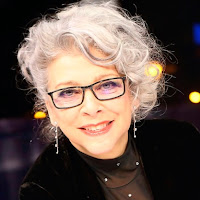 “Beyond its connection to the Western genre (or to bandit films, as is the case of Curro Jiménez), the features of the ASFAAN Award placed Kiti Mánver on the short list of people deserving of this Award in our Festival. She is one of the few Andalusian actresses who hasn’t received this Award yet, which seems unfathomable to us. Her name is deeply rooted in Spanish cinema history over the last three decades. One of her first appearances in the cinema world was in the Western film “La Banda de Jáider”. She is one the most beloved actresses, and one the few that enjoy unanimous prestige in cinema, theatre and television.

After several roles in the theatre, she made her debut in cinema playing the protagonist of the film Speak, Little Mute Girl (Manuel Gutiérrez Aragón, 1973), together with José Luis López Vázquez. She quickly joined the group of filmmakers and actors linked to the “comedia madrileña” movement during the Spanish Transition, taking part in films like What’s a Girl Like You Doing in a Place Like This? (Fernando Colomo, 1977), Ópera Prima (Fernando Trueba, 1980) and Pepi, Luci, Bom and Other Girls Like Mom (Pedro Almodóvar, 1980). She also took part in the filming of the episode “El destino de Antonio Navajo” in the TV series Curro Jiménez in 1976, in TVE channel. During the eighties and nineties, she stood out for her interpretation of secondary characters, versatile and chameleonic, like the one in All for the Money (Enrique Urbizu, 1991), for which she won the Goya Award for Best Supporting Actress. Her most famous roles are the ones she played under the directors Pedro Almodóvar (Women on the Verge of a Nervous Breakdown), The Flower of My Secret, Broken Embraces), Miguel Hermoso (Marvelous Light, Lola), Alex De la Iglesia (Common Wealth), and in the TV fiction series Gran Reserva, The origen, Velvet and Cable Girls.

The film awards will be posted tomorrow.
Posted by Tom B. at 6:18 AM