Who Are Those Composers? ~ Werner Eisbrenner 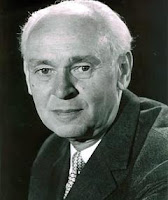 Eisbrenner studied from 1927 to 1929 at the Staatliche Musikakademie in Berlin studying church and educational music.  He then worked as a pianist, arranger, bandmaster and conductor.  He composed violin concertos and orchestral music as well as the musical comedy “Von Hand zu Hand”.

Eisbrenner became especially important as a film composer and is best known for his tunes to the Hans Albers movie “Große Freiheit Nr. 7”.  Eisbrenner also worked in radio and television and had a private educational institute for church and school music called "Lehrinstitut für Kirchen- und Schulmusik".  In 1974 he received the Filmband in Gold for many years of outstanding work in German film.  In his honor, a plaque was unveiled on April 23, 1998 at his former home Bismarckallee 32a in Berlin. He was married to Kathe Jacobi until her death in 1974.

After his death on November 7, 1981 in West Berlin, Germany, his estate became the German Composers Archive in the Dresden European Center of the Arts Hellerau.