The visionary who revived the dream of Sergio Leone

Guillermo de Oliveira recovers for the cinema the cemetery of "The Good, the Bad and the Ugly" 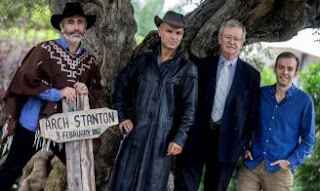 “Sad Hill Unearthed” is the story of the cemetery that Sergio Leone created in Burgos to shoot the last sequence of "The Good, the Ugly and the Bad" (1966), but it’s also the story of a dream of a group of followers of this "spaghetti western" for recovering the scenario of the famous duel.

“Sad Hill Unearthed” is a sign that dreams can be fulfilled. They know its four protagonists, David Alba, Diego Montero, Joseba del Valle and Sergio Garcia, of the Cultural Association Sad Hill, which in 2014 decided to remove all the vegetation from the Sad Hill cemetery, located in the Mirandilla Valley (Burgos), where Sergio Leone filmed the duel between the three characters of "The Good, the Bad and the Ugly" (1966). And he knows the director of this documentary, the vigués Guillermo de Oliveira, who also met with the odd obstacle along the way to make this film a reality.

De Oliveira documented the recovery of Sad Hill from the first digging works, in 2015, until the party in a revived Sad Hill with which these archaeologists of the cinema commemorated the fiftieth anniversary of this "spaghetti western". "I learned about the project through a friend and I knew right away that I had to tell that story, although at the beginning it was going to be a short film", explained the director from Almería yesterday, where in the afternoon the documentary was screened at the Western Festival of Almería, after passing through Sitges, where he premiered in Spain after his tour of the Tokyo, Santa Bárbara (United States) and Buenos Aires contests.

But the story was growing, parallel to the work in Sad Hill, and while the association collected voluntary labor in the network and funds through a crowdfunding campaign - "Sponsor a grave" -, De Oliveira initiated the contacts to speak with the shooting team, fans of the film and ex-soldiers and officers of the San Marcial de Burgos barracks, employees to build the cemetery and act as extras in the sequence of the blasting of the bridge, also filmed in Burgos. Clint Eastwood, "the Good"; Ennio Morricone, author of the soundtrack; Christopher Frayling, writer and biographer of Sergio Leone (Rome, 1929-1989); Eugenio Alabiso, editor of "El bueno, el ugio y el malo", and Sergio Salvati, photography assistant, participate in the documentary, as well as directors Joe Dante ("Gremlins") and Álex de la Iglesia, and the leader of Metallica, James Hetfield, among other fans of the movie.

"Getting to Eastwood, Morricone and Hetfield took months, we had to arm ourselves with patience because sometimes the hardest thing is not to convince them, but that those around them send them the proposal," says De Oliveira. Only Quetin Tarantino, a great admirer of Leone's cinema, was left out of the documentary. "I think our message did not reach him, but I know he received the tape from a journalist who was in Sitges," he says.

The images of a Metallica concert in Gothenburg (Germany) open and close the "Unearthing Sad Hill", thus completing a circle similar to that drawn by the crosses of Sad Hill, conceived as a Roman circus.

The documentary will reach the cinemas next October 19, although to see it in Vigo will have to wait a little longer, until the 26th, in a session that will have the presence of the director himself. "It's not just a movie about cinema, but about the achievement of dreams, and that's why anyone who comes to see it will see itself reflected, even if it likes another type of cinema," he says.

De Oliveira and the production company, Zapruder Pictures, have a tomb in Sad Hill, like thousands of people who participated in the sponsorship campaign that the association launched to be able to cope with the material expenses to recover the 5,000 crosses of the Sad Hill original. "People from more than thirty countries participated, which gives an idea of ​​the importance of this initiative and of the film itself.There is no better filter than the passage of time and 'The good, the ugly and the bad' will outlive us all ", says De Oliveira, who also highlights the communion of the image with the soundtrack. "The film cannot be understood without the music of Morricone," he says. Precisely getting the rights to use the music and images of the "spaghetti western" was the most difficult. "I came to think that I would have to show it without the permits even if they denounced me because I knew that the story had to be known," he insists.