Cane Randagio (Stray Dog) is adventuresome half-breed was drawn and written by Antonino Mancuso and Lino Jeva. As a mixed blood he tries to make the white settlers and the Redskins live together. To accompany him he can count on his mustang Tzarak. Series was featured in El Bravo. When needed he deals out punishment for the bad guys, and then he departs once again back into his solitary life. 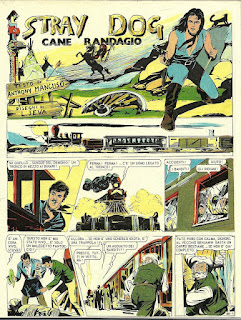