50th Anniversary of “And Now… Make Your Peace With God”

It was 50 years ago that “Ed ora… raccomand l’anima a Dio!” (And Now… Make Your Peace With God) premiered in Rome, Italy. The film was directed by Miles Deem (Demofilo Fidani) and starred Fabio Testi, Jeff Cameron and Fardin.

Stanley Missouri and Steve Cooper are traveling by stagecoach to Denver City. Suddenly bandits appear and Stanley and Steve try to hold them off a Sanders, a passenger riding on top of the coach, joins in and the bandits are defeated and losing a few lives. After the robbery the trio enjoys a smoke and we see a flashback which fills in why Stanley and Steve are heading to Denver City in the first lace (Stanley to claim an inheritance after the massacre of his family and Steve to recover stolen gold). Both atrocities have been committed by Jonathan Clay and his gang. Sanders also has a reason for being in Denver City but it is never clearly revealed. Arriving in town they find they will get no help from the law as the candidate for sheriff is corrupt and an ally of Clay. When Clay learns Sanders and Cooper are in town for revenge he sets out to eliminate them but the tables are eventually turned. Sanders managers to find the gold and returns it to Stanley and Cooper gets Clay to sign a legal document returning his inheritance before meeting his death at the hands of Cooper. 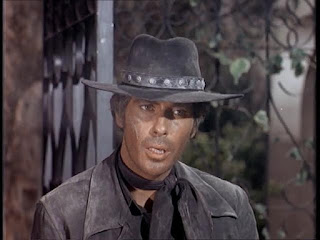