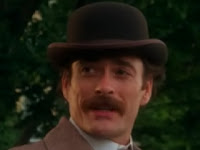 Donald Alan Ewer passed away peacefully on Monday October 15th, 2018 at the age of 95. Born in Great Dunmow, Essex, England on September 10, 1923. Donald made his acting debut at Stratford in 1958 and returned in 1969, performing there for a total of five seasons. In 1970 he won an Obie Award for his performance in"Saved" in the Off-Broadway production at the Chelsea Theatre Centre. He has numerous film credits to his name including Doolittle in Pygmalion with Peter O'Toole and Margot Kidder, and Spider with Ralph Fiennes. Ewar appeared as Jack McVie and Ezra Adams in the Euro-western TV series “The Campbells” in 1989 and 1990.
Posted by Tom B. at 9:09 AM