Today marks the 50th Anniversary in Rome, Italy of the release of “Guns for San Sebastian”, directed by  Henri Verneuil and starring Anthony Quinn, Charles Bronson and Anjanette Comer and takes place in 1743 Mexico. Pursued by government troops, the bandit Léon Alastray seeks sanctuary in a Franciscan church. When Father Joseph refuses to hand over Alastray to the authorities, he is banished to San Sebastian, a small village situated in Indian territory. Alastray has no choice but to accompany his benefactor, dressed in the habiliments of a monk. The two men are surprised to find the village practically deserted, most of its inhabitants having been killed or driven away by hostile Indians. After Father Joseph is shot dead by an Comanchero, Alastray takes his place and helps the remaining villagers to defend themselves against Indian attacks while also fending off Teclo and his Comancheros who are actually behind the attacks.

This is a story driven western but one that moves along well and features some good acting by main players Quinn, Comer, Jaffe and Bronson. Quinn hiding out in the Mexican village wants only to be left alone and detests the Mexican villagers. When he’s thought to be a priest and one who can unite the farmers against the rule of the Yaquis lead by Golden Lance who are really just doing the bidding of Teclo. When Quinn is tortured and left to die he decides to help the peons not only for their sake but for his own revenge.

The score is one of Morricone’s hidden gems and the Mexican scenery is gorgeous in spots. Some don’t classify this as a western because it comes to early in settlement of Mexico. If you didn’t know what year it was supposed to be taking place it could be 1880 as far as I’m concerned.

Story: A legendary Mexican bandit poses as a priest in the desolate village of San Sebastian to escape prosecution by the Mexican army. He uses his connections to get guns and help the local peasants fight the Yaqui Indians and their halfbreed advisor. 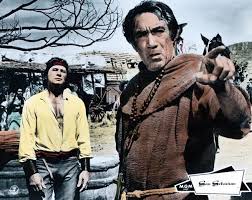