Who Are Those Guys? ~ Traian Costea 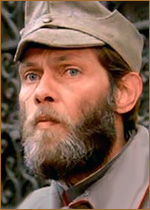 Traian Costea was born in Vălenii de Arieş, Romania on November 24, 1946. He graduated from the Institute of Theatrical Arts and Cinematography in 1969. He then worked at the National Theater in Târgu Mureș as an actor and director. In 1978, Costea played in his first film role in the movie “Artista, dolarii si Ardelenii” (The Actress, the Dollars and the Transylvanians) in the role of Barney. Costea died in Târgu Mureş, Romania on August 20, 2004. He was 57.

The Actress, the Dollars and the Transylvanians – 1978 (Barney)