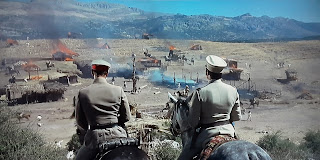 This scene was filmed at the Sierra de Huétor Nature Park in Granada, Spain in 1969.