Jericho Brown, Hailed in TV Circles, to Sing at Yambilee

Jack O’Brian, television editor of the New York Journal-American, is known as a pretty tough guy in a trade that tends to send forth superlatives like plain old breath.

When O’Brian mentions a name in his daily column, it means that the soul who owns the name is somebody. When he gives that person and inch or two of type, they’ve arrived.

And when he devotes and entire column to them, they’ve gone on to be nothing this side of sensational.

A 20-year-old gent named Jericho Brown has been the recipient of a column and, according to O’Brian, he is terrific; and according the Yambilee – he’s going to be here for it.

O’Brian and writers in Memphis and Cleveland, where Brown has been on tour, hail him as the find of the year. A sort of cross between Elvis and Boone.

And RKO – Unique records seem to agree. They’ve just handed old Jericho, a $100,000 contract, and had to outbid seven other companies to get him.

In other words, the guy is considered one of the hottest items in show business right now.

The teenagers? Well, girls, he stands 6 feet 6 inches, is built like an athlete, which he is, and hails from a town down the road by name of Lafayette.

He attended high school there, went to Louisiana College where he was a four-star athlete, and one bright day with $48 in his jeans, a guitar in one hand, and the other hand held out to the road, hitchhiked on down (or maybe it’s up) to Hollywood.

There, he treaded the well-worn paths to the record companies certain that he’d get discovered. And what do you know it happened.

Artie Wayne, who used to sing with Freddy Martin’s band and now records and manages talent, heard a fellow in the recording company corridor say, “That kid there thinks he can sing. I don’t know if he can or not. I just don’t listen to them anymore.”

Now this kind of reminded old Artie of his own starting days, so he asked Jericho if he might hear the test recording, he’d brought along.

What happened next is recorded for posterity in Artie’s own words:

“It was just a cheap, almost home – made recording, but there was something about the tone and style, so I put $3,000 into a recording session and did it right. Then I knew Jericho had something even if the wise guys didn’t have time to listen.”

The rest is history or at any rate is going to be history. Jerich writes some of the songs he sings and currently has a platter out with “Darlin, I Love Thee,” on one side and “Little Neva” on the other.

He’s going to sing at the Princess Luncheon Wednesday at Indian Hills Country Club, at the Coronation at 3:30 p.m. the same day, and at the King and Queen’s Grand Ball that night at 8:30 at the Southern Club.

Thursday will find him in the parade and if he can be persuaded, as a guest at the Yambecue. 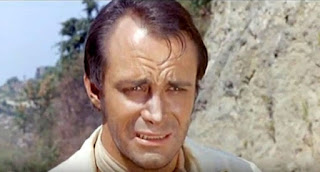 [Jericho Brown was an alias used by actor Bob Henry who’s real name was Robert Henry Hensley and starred as Pat Scotty in 1967’s “A Colt in the Hand of the Devil”. As a singer and composer in the early 1960s. Jericho Brown released about half a dozen 45s most of which he wrote and produced himself. He worked with arrangers such as David Gates, Luchi DeJesus, Don Ralke and Gene Page but none of his records charted.  Henry was born in Port Arthur, Texas on April 24, 1936 and died in Arlington, Texas on May 22, 2016.]