50th Anniversary of the Premier of “Vengeance Trail”

Today marks the 50th anniversary of the premier of “Vengeance Trail” directed by Pasquale Squititieri and starring Leonard Mann, Ivan Rassimov and Klaus Kinski. The film tells the tale of Jeremiah/Jim Bridger (Leonard Mann) growing up with a fierce hatred for the Indians who massacred his family when he was a child, Jim Bridges, nicknamed "Yellow-hair," as an adult, he began a private war of annihilation against the redskins. One day, however, he accidentally discovered the truth: his family was killed by whites dressed as Indians, led by a villain named Perkins (Ivan Rassimov) who was backed by Virgil Prescott (Klaus Kinksi) the editor of the local newspaper. They had an interest to terrorize the area to encourage farmers to give their land away for a pittance. Entering the employ of Perkins, who still uses the old tactics to reach his goals, Jim manages to sabotage the plans and destroy the gang of raiders, aided in his efforts by a group of authentic Indians. 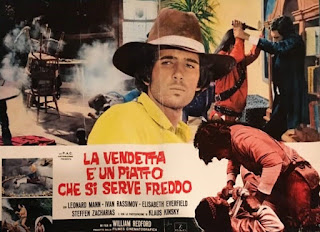