We can never say with certainty but, perhaps, the history of cinema in Almería would not be as we know it today without the irruption into our arid landscapes of the filmmaker Joaquín Luis Romero Marchent (Madrid, August 26, 1921 - Madrid, August 16, 2012). Spanish cinema has lost part of its history and its memory with the death of both director Joaquín Luis Romero Marchent and actor Sancho Gracia, two of the main creators of 'Curro Jiménez', one of the best television series ever made in Spain, have left us forever. 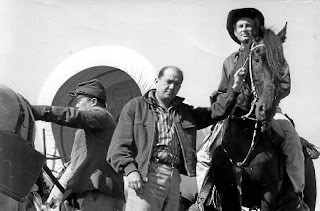 If Sancho Gracia was the image and vitalist force of Curro Jiménez, Joaquín, or rather, Tato, as his friends called him, he was his soul. But Tato not only represented a key part of the Spanish audiovisual for 'Curro Jiménez', but also for the more than twenty films he directed. Within that extensive filmography that takes place in five decades, from the 1950s to the 1990s, the westerns that he crystallized in Almería stand out with force.

With a long and varied career with suspense films ('Permanent Court', 1953), comedies ('The Man with the White Umbrella', 1958), action with a particular adaptation of 'El Coyote' (1955) co-produced with Mexico, and the success of tapes that could be framed in the western such as 'La venganza del zorro' (1962), 'Cabalgando al muerte' (1962) and 'Tres Hombres buenos' (1963), Joaquín Romero Marchent lands in Almería to film The two westerns that would consecrate him as director practically consecutively: 'Three Ruthless Ones' (1963) and 'Hour of Death' (1964).

'Gazpacho western'
Tato arrived in Almería following the recommendation of Alfredo Fraile, director of photography who got to know the province during the filming of 'Tierra brutal' (1962) and who later became the first owner of the western town that would take his name, El Fraile, later known as Mini-Holywood and Oasys Park today. It must be emphasized that these two westerns are shot before Sergio Leone's, so the pioneering nature of these works was essential for the consecutive success of the Italian director and the genre that soon became known as spaghetti western. As Romero Marchent himself said with a certain slyness: "By historical order it should have been called gazpacho western."

'Three Ruthless Ones' and 'Hour of Death' constitute solid films more in the classic line marked by geniuses like John Ford, than of the transgressive variant that Leone would promote. Two works that from the narrative point of view resist any comparison with titles of their time. In addition to the technical quality, to elevate the Almeria landscapes for the western and to pave the way for the following authors who dealt with the genre, Romero Marchent was decisive for the triumph of the co-production formula, which benefited so much the filming in our Province. He started a business relationship with producer Alberto Grimaldi who would later spawn some of the masterpieces of the European western such as 'The Good, the Ugly and the Bad'.

Joaquín Romero Marchent returned to Almería several times, as did his brother Rafael who came as his assistant and later returned as director of his own films. 'El Habichuela', the taxi driver Diego Fernández or the production director José Salcedo, among others, were some of his trusted people in the land of Indalo.

The 'Almería in short' Festival in 1998 honored Romero Marchent's career with the 'Almería, land of cinema' award and, the following year, also at the festival, a book on his figure written by Carlos Aguilar was presented under the title Joaquin Romero Marchent. The Firmness of the Professional.

Talent and tenacity
I was extremely lucky to meet Joaquín Romero Marchent when I interviewed him to remember the beloved Almeria extra 'El Habichuela'. After that meeting, we spoke again many times and part of those passionate conversations, for me master lessons in cinema and life, I included them in my book Los española del western with which I wanted to pay tribute to people who, like him, they taught me to love cinema.

His infinite tenacity always caught my attention, at 86 years old, when the physical body was no longer with him, his mind did not stop devising projects, he had several scripts that he dreamed of taking to the big screen. The logic of the cycle of life is fulfilled and more and more illustrious names are leaving us, those who with their silent but tireless work made the Almería of cinema possible. Joaquín Luis Romero Marchent's must appear in capital letters in this adventure. It sounds like a cliché but I never tire of writing it, Tato, like the great men of cinema, lives in each of his films. He has conquered eternity. Now, while Sancho Gracia gets back on the horse, Tato adjusts the shot to shout action!, with the illusion of the first shoot.