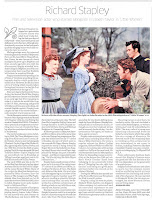 Richard Stapley belonged to a generation of movie actors who plied their trade during the halcyon days of Hollywood when stars were great and dalliances were discreet. Although predominantly an actor, he had polymath qualities ranging from writer and motorcycle racer to courier.

His beginnings were far removed from the glamorous world of Hollywood. Born on 20 June 1923 in Westcliff-on-Sea, Essex, he was the son of a bank manager. He grew up in Brighton and from an early age fell in love with the silver screen. Stapley attended Varndean College in Brighton; one of his contemporaries there was Paul Scofield, with whom he remained friends.

Stapley remembered spending a lot of time at Varndean practicing his autograph; destiny would make him a movie actor. However, he did also have a love of writing which would endure throughout his career; he had his first novel published at the age of 17.

After serving in the Royal Air Force during the Second World War, Stapley got into repertory theatre and decided at an early age that if he was going to make it in movies he would have to go to the US. Slim, charming, and graced with diamond blue eyes and a deep, educated English accent, Stapley soon caught the eye of the movie-makers and a number of actresses as well.

Gloria Swanson rented a temporary house in Palm Springs which she shared with Stapley while she was filming the musical “Sunset Blvd” (1950). Whether it was a practical arrangement or something more was not revealed by Stapley when he reminisced about his days in Hollywood.

The movie breaks soon came, including in 1948 “The Three Musketeers”, starring Gene Kelly and Lana Turner, “Little Women”, where he starred alongside Elizabeth Taylor, “King of the Khyber Rifles”, appearing with Tyrone Power, and the 1956 film “D-Day the Sixth of June”, playing David Archer alongside Richard Todd and Robert Taylor. Stapley had an uncredited role in “Breakfast at Tiffany's”; another small part was in Alfred Hitchcock's 1972 film “Frenzy”.

The early 1960s saw him in the TV series ‘Man from Interpol’, playing Agent Anthony Smith; for this role he adopted the name Richard Wyler. Some of the scripts for ‘Man from Interpol’ were penned by Brian Clemens, later the doyen of ‘The Avengers’ and ‘The Professionals’. ‘Man from Interpol’ ran for 39 episodes between 1960 and 1961; after it ended, Stapley never quite made it back to Hollywood films.

He starred in a number of European films, including “El Precio de un Hombre” (The Ugly Ones”, playing bounty hunter Luke Chilson. He also starred with Jack Palance in “The Barbarians”, and then in 1969 “The Seven Secrets of Sumuru” (aka The Girl from Rio) alongside Shirley Eaton and George Sanders. In 1970, Stapley co-starred with Bette Davis and Michael Redgrave in “Connecting Rooms”.

A follow-up series to ‘Man from Interpol’ did not follow. Around the same time as he was filming that program, Stapley had auditioned for the TV series of ‘Ivanhoe’, the part of which went to his comrade Sir Roger Moore. Stapley regaled the story of being driven by Roger Moore in his Rolls Royce. Stapley asked Moore what would have happened if he had got the part of Ivanhoe instead and Moore responded by saying, "You'd be driving this Rolls Royce instead of me... "

Stapley had a steady stream of character parts in many of the mainstream TV series of the 1960s and 1970s, including ‘The Baron’, ‘Z Cars’, ‘The Saint’ and ‘Return of the Saint’. His work also included appearing in a number of the legendary Imperial Leather soap TV adverts, exuding a sybaritic lifestyle and attaining what can only be described as a lifetime achievement of sharing a bath (on set) with his co-star, namely one Joanna Lumley.

If acting was a love, motorcycles were Stapley's passion and it is no surprise that he counted among his friends the stunt rider from “The Great Escape” responsible for the death-defying jump made by Steve McQueen. Stapley himself partook in motorcycle stunts, although one went horrendously wrong and he severely broke his leg but determined to ride again, he made an ultra-quick recovery.

Stapley rode motorcycles in professional races, including dices with the likes of Mike Hawthorn. He wrote a regular column for Motor Cycling magazine, Richard Wyler's Coffee Bar Column, recounting tales of his acting exploits or thrills on the race track. He received praise from the Metropolitan Police for dissuading young motorcyclists at the famous Ace Caf on London's North Circular Road from indulging in the potentially lethal dare of "dropping the coin right into the slot" and racing to a given point and back before the record on the jukebox finished.

During the 1960s he also opened one of the first coffee bars near Streatham Ice Rink in south London.

Stapley, using his nom de plume, Richard Wyler, had his own dispatch riders company in London and used his race-track experience on one occasion to get a very important package from central London to Northolt Airfield through heavy traffic in about 30 minutes.

His acting career on slow burn, he tended to write. His work included a novel called Naked Legacy, co-written with Lester Cook III and published in 2004. The story tells of a young man inheriting a manuscript from the father he never knew, which then sends him on a voyage of discovery. He devoted much of his remaining days to working on film scripts that he was determined to see come to fruition, including “Tomorrow Has Been Cancelled”. Stapley was also completing his autobiography, To Slip and Fall in L.A.

Some unfortunate business deals meant that Stapley's finances were not good and the last decade of his life was dependent on the generosity of acquaintances.

Stapley had enthusiasm and talent to spare, but the constant money worries and failing health at times shadowed the charming and heroic side of his character. He was married to Elizabeth Emerson in 1963; the two were estranged, but never divorced. He has one surviving sister. 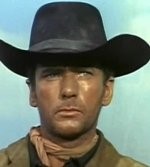