As we know most of the Euro-westerns were co-productions from Italy, Spain, Germany and France which incorporated British and American actors to gain a worldwide audience. The films  distribution. That means Italian, Spanish, German, French and English voice actors were hired to dub the films. Even actors from the countries where the film was to be shown were often dubbed by voice actors for various reasons such as the actors were already busy making another film, they wanted to paid additional salaries for dubbing their voices, the actor’s voice didn’t fit the character they were playing, accidents to the actors and in some cases even death before the film could be dubbed. 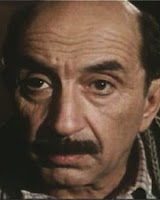 Arthur Djanikian was born on Varna, France on March 21, 1926. He used the name Henry Djanik for his professional name. Djanik trained in drama and began an acting career in the 1950s. After several stage productions and some appearances on TV and in films, he then turned to dubbing.

With his deep voice, very characteristic and easily recognizable, he quickly becomes a singular voice in the field. He thus doubles actors such as Steve McQueen in his first films (The Magnificent 7 and The Great Escape), Anthony Quinn in the majority of his films, Telly Savalas including Kojak others were Simon Oakland, Ed Asner, Mister T and Ernest Bornine.

Within series and animated films, he has notably lent his voice to many characters such as Ultra Magnus, Autobots who is the city commander of Metroplex, Megatron, the main antagonist of the first Transformers series, as well as the donkey Eeyore in all the adventures of Winnie the Pooh until the early 2000s, or Ikki in Saint Seiya (and many other characters in the same series including Dohko / the Old Master or Ares …).