We continue our search for filming locations of “Run, Man, Run”. The scene shifts to a Mexican village where a doctor examines the body of a dead man who has been murdered and 14 bullet holes are counted. The assassins are French mercenaries who came with Maximilian, stayed with Juarez and now work for Diaz. The doctor tells the two men that a representative of Diaz has arrived and they walk to a waiting coach. The passenger congratulates Colonel Sevigny of a job well done. He tells them of their next assignment of a prisoner to be released from the Torreon Prison and that he is worth three million dollars.

This scene was filmed in Polopos, Spain. 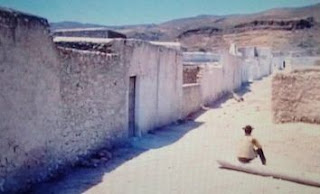