CASTEL DEL MONTE - Even a red dune buggy with a yellow hood welcomed Terence Hill at Fonte Vetica, exactly fifty years after the consecration of the Trinity saga. He returned to the places that framed the film by Enzo Barboni, aka EB Clucher. The actor, guest of the Gran Sasso Festival, attended a meeting with Cristiana Pedersoli, one of Bud Spencer's daughters, Sandra Zingarelli, the daughter of the producer of Trinità, Don Samuele Pinna, an essayist who dedicated two volumes to the couple queen of spaghetti-western, and Piercesare Stagni, film historian and author of the book The Strong and Gentle cinema, which Federico Vittorini preceded the screening of the successful film. 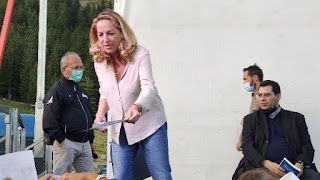 They came from all over Italy, including Ravenna and the province of Catania, all looking for an autograph on t-shirts, photographs and above all cowboy hats.

“The bean scene? Yes, I really ate them all", recalled the actor answering a question from the audience," but after 36 hours of fasting and demanding that they were prepared as I said, that is, without bacon and with a lot of chili!".

Luca and Marco Nicoletti from the province of Catania arrived for the purpose of getting a autograph of Terence Hill on the poster of the film. Shy, he does not allow himself to microphones or even selfies, only autographs. Immediately after the start of the meeting he approaches Cristiana Pedersoli hugging her and remembering when she went with Bud Spencer and her "who was so small" to see the premiere of the film.

Excited the mayor of Castel del Monte Matteo Pastorelli: "I belong to the generation that grew up with Bud Spencer and Terence Hill, I was elected in September and for the first event in attendance I could not ask for more, now they can also commission the Municipality", he joked.

"The film was born a bit by chance, we couldn't find a script that could please both the producer and us, Zingarelli got this script, he gave a copy to Bud and one to me, at home I had it read to my wife who thought it was funny and so we did it,” said Terence Hill. "We liked this script and it was lucky, but we took a big risk because we didn't know it could be so well received by the public," he added, saying that the final fist fight that should have lasted three minutes lasted ten after hours of his insistence with the director and paved the way for many others.

Responding to questions from fans, the actor also explained that the scenes that became famous of the fist fights were actually ballets: "The punches were a ritual, the weapons master did one, two, three, four ... and in the subconscious it was a ritual. spectator enjoyed it because it was actually a ballet!”.

Ponds that before the meeting he came back right at the canyon Scoppaturo, along with Terence Hill and even the mayor Pierluigi Biondi, where they filmed the famous opening scene of They Call Me Trinity, recalled how in Abruzzo that 250 films were shot.

“For us this film was a change of life”, Zingarelli's daughter recalled: “It was born from the magic of the meeting of dad, Enzo Barboni, Terence and Bud, it reflects their way of seeing life. At the time their films were highly criticized, the critics were pretty naughty but now they have become cult and it's impressive to see you here for these films born for fun”.

“No one expected from the second film the success it has had, much greater than the first. These are films that after 50 years are still current, they are not dated like many others”, he added. “These films could still be made today, there is nothing that takes you back to a certain period. The great friendship born between them then also shines through in the films. I am thrilled to see you, especially the children”, she said to the large audience, “from generation to generation these films are always very topical”. 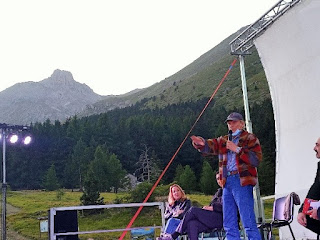 "With Bud we were like brothers, we had fun", said Hill then answering questions from a very young fan, "even this way of being children, the blow on the head of Bud in the film God Forgives Not Me was invented on the spot. "We invented the pigeon cry because if I hit you on the right side of the head you go to the left and vice versa, but if I hit you on the head what movement do you have to do?”.

Also present was Gino Faccia, 79-year-old from Assergi who brought horses from the ranch used in the film: "We were with the beans from morning to evening", he recalled, receiving thanks from Terence Hill who also recalled how the horse used by him "was so well trained who was always stationary and as soon as I signaled he would leave!”.

The initiative, financed by the Municipality of L'Aquila, is part of the Open Week 2021, scheduled from July 28 to August 8 throughout the Gran Sasso in L'Aquila with events, tastings, excursions, shows, games and screenings. 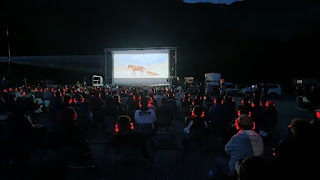