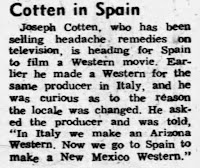 Joseph Cotton, who has been selling headache remedies on television, is heading for Spain to film a western movie. Earlier he made a western for the same producer in Italy, and he was curious as to the reason the locale was changed. He asked the producer and was told, “In Italy we make an Arizona Western. Now we go to Spain to make a New Mexico Western.”