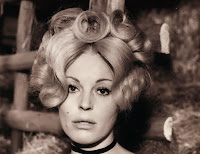 Italian actress Franca Polesello passed away in Rome, Italy on March 8, 2021. She was 84. The news was made public on August 7th. Born in Oderzo, Treviso, Veneto, Italy on July 27, 1936. Franca began her career in the late 1950s after becoming Miss Lombardy. She worked as a television model and model, before appearing in sword and sandal films. She was later cast in comedy, western, drama and spy story films. Among the roles that have given her greater notoriety we can mention the film “Il sorpasso”. Franca Polesello's career lasted a little over a decade, with about thirty film participations overall, after which the actress abandoned the artistic activity to be a wife and mother. Franca appeared in three Euro-westerns: “The Twins from Texas” (1964) as Madame Duval, probably her most famous role “Navajo Joe” (1966) as Barbara and in “Joe Dakota” (1967) as Rosy.
Posted by Tom B. at 11:58 AM