DO Arlanza, the best wines from a land yet to be discovered

Our route through the 'other' denominations of origin of Spain takes us to the DO Arlanza region, a land of wine (and film) yet to be discovered.

Located in a privileged geographical triangle, with Santo Domingo de Silos , Covarrubias and the town of Lerma at each vertex, the wineries of this denomination of origin are located in one of the historical complexes with the greatest historical value in Spain. A still unknown area, in which 25 wineries work with enthusiasm to offer different wines, from their own vineyards in small plots located at an altitude of up to 1,400 meters above sea level.

It is a wine region that is especially interesting for its multiple interpretations of the country's ink, Tempranillo, its queen variety. After visiting different producers and tasting a good representation of their wines, it is surprising that in such a small area, a single grape can have so many personalities.

Land of reds but also rosés , Arlanza shows that claret , with its traditional elaboration, can also be of quality. And it does so surrounded by a unique landscape that Clint Eastwood himself fell in love with during the filming of his well-known movie "The Good, the Ugly and the Bad."

The Sad Hill circular cemetery, with its four thousand fictitious graves, where the final scene of the mythical film shot by Sergio Leone in 1966 takes place, is located in the vicinity of the DO Arlanza and has recently been rebuilt by a group of local enthusiasts (must see documentary "Unearthed Sad Hill"  on Netflix prior to visit).

A magical setting nestled in a valley without electrical wiring, a chapter in the history of Spain by the hundreds of soldiers donated by Franco for its construction, to which we must add another movie location  : the Baltanás winery district.

The image is reminiscent of Hobbiton and La Comarca, the home of the 'hobbits' from JRR Tolkien's novels, but this place, which can be visited thanks to the wine tourism program of the Arlanza Wine Route , is real. The hill of the Castle of this Palencia town is completely excavated and full of underground cellars (374 to be exact) that were built, for the most part, during the 16th century.

Referencing Sad Hill Cemetery, this movie red is as young and geeky as its label. Away from the traditional elaborations, with less extraction, and coming from old vineyards planted at high altitudes, it is one of the freshest initiatives of the appellation. There is also a white version. Quite a discovery. Price: € 11 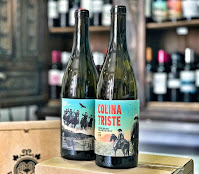