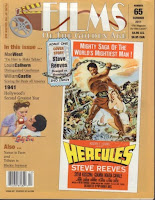 Films of the Golden Age

Appeared in Films of the Golden Age in 2011

Doing a western was a dream of mine. Truth is, no one believed me as a cowboy. They saw me as a gladiator or demi-god. Tunnel vision all the way. So, one day, I dressed up as a cowboy, walked into Universal studios, and talked to the head man. He blinked, rubbed his eyes and said, ‘yeah, you do look like a western guy!

Onset of The Last Days of Pompeii, Sergio Leone, the assistant director, pulled me over and said, ‘Steve, I’m thinking of doing a western based on a Japanese Samurai film.  Are you interested in the lead?’

Sergio directed most of Pompeii, despite the credits listing him as assistant director, first unit.  Mario Bonnard "was the official director, an older man, maybe 75 or 80, and there as a name.  Sergio had talent and energy, but what did he know about the Wild West? I turned him down flat.

An idea hit me! I took out 50 western novels, all paperbacks, narrowed them down to three I liked, and wrote a literary agent in New York City about securing the rights.

He said, ‘John Wayne has an option on one, and the other two, Clint Walker has options on.  But I understand in February, Walker’s gonna drop one and keep the other.’ Of all the 50 I’d read, Clint dropped the one I liked best!

It was originally called The Judas Gun, but I thought, geez, that’s too Biblical, so I retitled it Vivo per la tua morte.  In Italian, that didn’t go over too well. Translated, as I Live for Your Death!  It later became A Long Ride from Hell.

For the next six months, I collaborated with an Italian writer; he figured out the patterns--how to open and close a scene--and I did everything else. It was an excellent relationship, and we hammered out a pretty good script.

A Long Ride from Hell made money in Italy, but here in the States, not so much. Cinerama bought it as they were going under, and their distribution was poor.